Being a graduate trainee really means something in this company 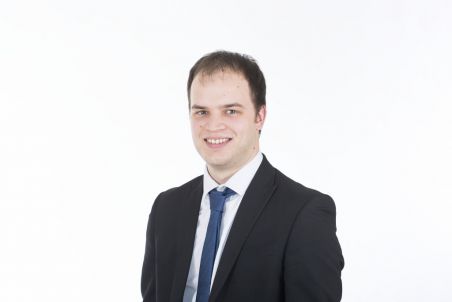 Graduate Trainee Alex Nott tells us about his journey from farming to underwriting.

What’s your NFUM story, where did you start, what do you do now and how did you get there?

I originally joined NFUM back in 2015 on the Life Insurance side of the business. While there I worked as an Adviser Services Representative, where I aided our many Financial Advisers by providing support and procuring data. I have always been quite a technical person, in fact I used to repair computers and phones to earn money at university. So naturally I thought that the Graduate Trainee scheme in IT looked pretty great! Unfortunately, while I got through to the assessment centre stage, I was ultimately unsuccessful.

However (I will forever be thankful for this) one of the assessors was going over the applications for the scheme and noted that I performed well at the assessments and, even better, I was a farmer! It just so happened that our Underwriting department was recruiting and a farming background would certainly help with understanding both the risks involved with farming and our policyholders’ perspective on any changes. So I was hired as a Graduate Trainee in Underwriting – still getting all of the benefits of the scheme. I currently work with Risk Selection, where I am our livestock expert but also specialise in renewable energy and engineering.

What is your proudest moment since joining as a Graduate Trainee?

Recently I attended the Energy Expo so that I could research all of the latest technology in the renewable energy sector. I was incredibly proud that I was able to represent NFU Mutual and that I had now learned enough to actually be able to make the most of such an opportunity. When I started I had zero insurance knowledge but six months later I was able to investigate multiple different technologies and present my findings back to my team and at technical forums. That revolution in my understanding was entirely down to the brilliant training offered to me. There is a wealth of training courses and e-learning available, and this is in addition to all of the on-the-job guidance provided by my experienced colleagues.

What will/do you remember most about your time on the Graduate Trainee scheme?

Mostly the fantastic support; being a graduate trainee really means something in this company, it opens a lot of doors. The most memorable example would have to be our month-and-a-bit induction. We met all of the senior management, including our CEO. These were not just quick handshakes but long meetings where we got to sit down with them and ask whatever we wanted. But that was just the beginning; we went on team building days, skills development days, and conducted project work which allowed us to work with many people across the business – personally I have found this useful as it gave me a network of people that could help with future projects.

What were your first few weeks on the scheme like?

Due to already working for the business I was able to join much earlier than the other trainees. Initially I spent a proportion of my time studying because I had very little knowledge of insurance, let alone underwriting and risk selection. However, I was quickly whisked off to the Livestock Show in Birmingham so that I could see all of the latest developments in the industry. I had one-to-one meetings with everyone in Risk Selection so that I could get to know my team. I also attended training days all over the place. It was a real whirlwind but I learned so much and it has stood me in good stead for the work I do now.

What advice would you give people applying?

I would urge them to pursue their interests and realise that the job is more than calculations. There is not a huge amount of maths involved in risk selection. You need to be proficient, absolutely, but the main focus is your decision making ability. As such, you will need to go off and research a multitude of topics and then form a solid plan of action based on that knowledge. A large proportion of that decision or plan will be about its impact on people. Therefore you will need excellent communication and problem solving skills as often there can be conflicting issues.

You will need to ask yourself many questions: How will this affect policyholders? What is the impact on agents? What will this mean for the business as a whole? It is a cliché but you need to able to think outside of the box. If you have an interest in the topic then it is incredibly helpful as you will inevitably end up with a much better understanding that will enable you tackle whatever problems there may be. Working on my family farm has undoubtedly helped in this regard, but you would be surprised how almost any outside interests can be factored in. What is your favourite sport? We probably insure a club. Do you like fixing old cars? Great, your knowledge will help you figure out the engineering risks in power generation. Everything feeds in, it is a very broad role with plenty of variety if you seek it out.

Exceptional. I really cannot imagine how much more could be done. As mentioned earlier, I have been given so much training and learning opportunities. When I joined I was assigned a mentor who, being one of the previous trainees, was happy to help with any questions I would have felt silly asking. We also had monthly catch ups (or ad-hoc ones as needed) in addition to the catching up with my line manager, placement manager, and coaching sessions with the Learning & Development team. If I have a problem there is always someone I can ask for help. I have to say as well that just in general NFU Mutual is a really friendly company. Often I will have to ring up a random person with a query and many will drop what they are doing right then so that they can assist me.

What skills have you gained since joining?

So many! It was certainly a steep learning curve but I had to pretty much build my underwriting skills from the ground up. The role has definitely sharpened up my debating and critical thinking skills – having to not only figure out problems but also weigh up potentially equal solutions. More recently, I attended a presentation skills course (something I have always struggled with) and it did wonders for my confidence.

Why did you apply for the scheme and has it lived up to expectations?

As I alluded to above, I am an odd case in that I did not actually apply for this role. However, it has definitely surpassed my original expectations. I applied to the scheme because of the great training and support that it offers. That is true of any of the schemes, whether it be IT, Finance, or Sales. Although I do not think that I realised the extent of this back then. I think that I probably expected trainees to be making the tea and given lots of odd jobs. However, almost immediately, I was able to provide real input into projects and get stuck into changes in the business. Upon reflection, I think risk selection actually suits me even better than IT would have – I get to leverage my farming knowledge and use skills developed from my degree (Geography).

What qualifications have you gained at NFUM and how have they helped?

So far I have gained my CII Certificate and am currently working towards my CII Diploma. This was a good grounding in Insurance and has been the basis for the majority of my work. I achieved this through an intensive two-week fast track course that I took with the rest of the trainees. Soon, I will also be taking PRINCE2 – a course for project managers, leaders, and coordinators. This will be especially useful as I take on more and more projects in future.

All of the trainees have been tasked with collectively managing NFU Mutual’s sports and social club (FISSC). As part of our induction we all took part in a company-wide rounders tournament. This was put on by last year’s trainees and was loads of fun. Now the mantle has passed to us and we will be organising monthly sporting/social events throughout the year. Recently we held a Poker/Bingo night at the club. It was a great success and something we hope to do again. It turns out that I have a terrible pokerface but at least all of the profits went to Young Minds – a charity that supports mental health and wellbeing for children and young people.