In Pricing, we’re all in it together 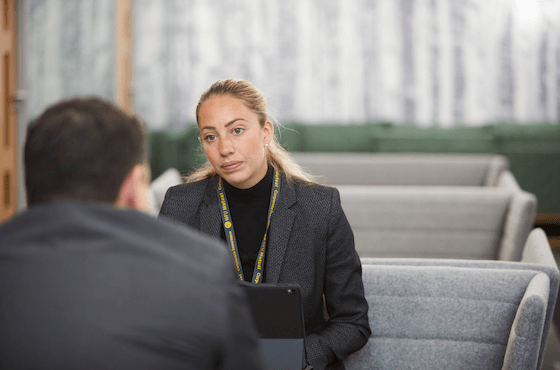 All about the people
The clearest message that comes through about the way the Pricing teams operate is that the people play a big part in this. Kirsten, Risk Pricing Manager says that a lot of this is down to the focus that NFU Mutual has on its customers. “To be honest, it just feels like we all have a common goal,” she says. “And I think that we all just work together towards that goal.”

But the most common word that people use when they’re describing the atmosphere in the Pricing teams is ‘friendly’. As Emily, Graduate Trainee in the Pricing Data team, puts it: “It's just a very friendly atmosphere. If you need help, there's someone almost begging to help you.” She even talks about how friendly she found the assessment centre when she first applied to join NFU Mutual. “It didn't feel like I was being pitted against everyone else,” she explains. “My overall experience with the assessment centre was a good experience. I found the general atmosphere really welcoming. And as soon as I came out, I knew I wanted to work there.”

Another Graduate Trainee, Jamie, echoes this sentiment when she describes his experience of joining NFU Mutual: “It was such a fantastic environment to be in, especially as a new person joining a big team and thinking all of these people have worked here for years. You just slot right in.”

Being competitive
It may be a friendly environment, but there’s still a competitive edge, as Alex, Data Consultant in the Pricing team, is keen to point out. He describes it as a “collaborative, competitive environment." Just because everyone is really friendly, we still want to be better than our competitors. We just aim to do it in the right way for our colleagues and our customers.

"It's great,” says Alex. “It's the sort of competitiveness that you had with your friends at university, but now it's with colleagues. Everybody's just pushing each other to do the best they can. And everybody expects you to do the best that you can too.”

Great surroundings
Katy, Pricing Delivery Manager, believes the work environment itself helps to foster teamwork and a sense of everyone pulling together. “The office is relatively in the countryside, because it's just outside Stratford-upon-Avon town centre,” she says. “There's a nice big field at the back and lots of sports and social activities to get involved in. And there are other things to get involved in that aren't part of your day job, too, such as social initiatives or doing volunteer work.”

Data Consultant, Alex, agrees that the facilities at the company’s headquarters in Stratford-upon-Avon make a big difference. “The in-house Costa. The showers, so you can go for a run at lunchtime. The free bus into town. The fields and tennis courts. I could talk about this forever. There's quite a lot!”

But, for most of the Pricing team at NFU Mutual, the most attractive aspect of working here is the people. Jess, a Lead Analyst, sums it up best: “The people in Pricing are just great. There's no other way to put it, to be honest.”

Find out more
Discover for yourself what makes working in Pricing at NFU Mutual so great.