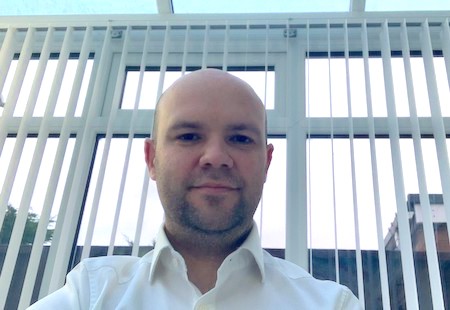 NFU Mutual is a company which offers a unique blend of long-standing traditions, strong community ties, a forward-thinking attitude and a progressive mindset, which all contribute to creating a great place to work. And our successful and growing Pricing Department makes no exception. It currently boosts a 50 strong team consisting of many professionals with a long history within the company and it continues to attract new members such as Steve Dobbs who joined us earlier in the year as Head of Pricing Analytics.

What attracted you to NFU Mutual?
I was initially attracted towards finding more out about the role because of NFU Mutual’s strong reputation within the industry for fairness, ethics and customer focus. As I found out more about the role, it also became apparent that the general culture, and the ambitions of the Pricing Department were well aligned with my own goals and preferred ways of working.

When did you join us?
I joined in the midst of lockdown – in the middle of May this year.

How did it feel joining a new company during lockdown and how did you find our remote on-boarding process?
There was very good ongoing communication leading up to my start date, which meant there was no real potential for surprises when it came to my first few weeks in the role. The technology also worked well for me from day one, and so I was immediately able to meet people across the department via Skype and MS Teams. It’s hard to compare against how it would all have been under normal circumstances, but I would say that within the first few weeks I felt fairly settled in and like I was part of the team.

How big is the team that you look after and where does it sit within the rest of the Pricing function?
I look after the Pricing Analytics function. This covers data for pricing, claims and demand modelling, R&D and some aspects of price implementation. We work very closely with the other pricing and underwriting teams – especially risk, street and commercial pricing and several major project teams.

What has been your approach in getting to know your team from a distance?
The key for me has simply been ongoing regular communication. For me that’s a mixture of regular one to ones via MS Teams, but more importantly than that just making it very clear that my ‘virtual door’ is always open whenever anyone needs to talk things through. If we were all in the office there would always be regular ‘around the desk’ conversations, which often leads to some really important team building as well as work ideas. Because we can’t quite replicate that, making adequate time for the ad hoc calls and chats is even more important.

What do you see as the most exciting part of your job?
I’ve come from a fairly technical background and so anything technically challenging and innovative I have always had a soft spot for – and so the ongoing innovations in the machine learning space have certainly been a highlight. But I also enjoy applying business sense and pragmatism to these things, and working with the wider department to leverage improved customer outcomes from it all will be a real highlight in the months to come.

And what is the biggest challenge that you face?
Being brand new to the organisation, it’s that task of becoming familiar with all the NFU Mutual-specific product and data nuances – familiarity with the product range and covers, systems, data structures, all those things that are different and unique to each individual company.

What is the one thing that surprised you since joining NFU Mutual?
The rate of progress they have made as a Pricing Department over the last few years, and the success rate with delivering change.

How do you see the Pricing department developing in the next few years?
It’s largely about gradually stepping up pace and agility in pricing without losing the great governance and collaborative culture that has contributed so much to NFUM’s successes to date. And using technology and ongoing innovation to help enable this as well.

When you were a kid, what did you want to be when you grew up?
I’d like to say an Actuary, but truth is I hadn’t heard of one until I was about 20. For a brief time when I was really young I wanted to be a Formula One driver, and then later I wanted to be a musician.

If you could trade places with anyone for a day, who would it be?
That’s a hard one. Maybe Joe Rogan as he seems to have found a way to make a living by just talking to all these really interesting people each day.

If you could only have three apps on your smartphone, which ones would you pick?
Whatsapp, Spotify and my GPS maps app because I have a disastrous sense of direction.

We welcome Steve on board and wish him a successful and fulfilling career with NFU Mutual! We hope this has revealed a part of what our Pricing department is like and we will continue to share more with you so watch this space.