One year in one hour. By focusing on people, the numbers follow. 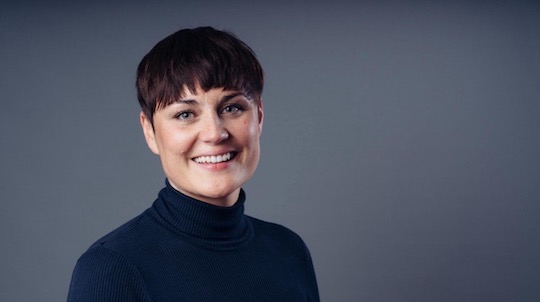 Gina Keighley started with us 12 months ago as General Underwriting Manager. Joining the business during one of the most turbulent times in history, with a new baby and a professional mountain to climb. Her journey so far has been nothing short of incredible. We caught up with Gina to mark the occasion, find out her highlights from the past year and plans for the next 12 months and beyond.

Congratulations on your first anniversary! How do you feel?
I joined on the 4th of July, American Independence Day! I can’t believe it’s gone by so fast. When I started there were a lot of challenges, but I can honestly say it’s been an absolute blast. The team we have now is just amazing and I’m so proud of everything we’ve achieved this last year.

Tell us a bit about your background before NFU Mutual
I’d worked for a large insurance company for 14 years, starting on the phone talking to customers about their commercial business and underwriting insurance policies and worked my way up to manage commercial departments. I then worked offshore for the same company in India and South Africa, in the outsourcing sector, where I managed Business Process Outsourcing (BPO), before finally moving into managing Agricultural Departments.

I then took voluntary redundancy and tried a different sector for a change, but it wasn’t for me, and I was soon keen to return to the Insurance industry. I left there to consider my options and while doing so the pandemic hit and I found out the wonderful news that I was pregnant. Voluntarily unemployed and pregnant, during a pandemic. It was as wild as it could get! I've now got an 18-month-old called Louie, who’s amazing and a great job here at NFU Mutual!

What made you choose NFU Mutual as your next career move?
From my previous role, the Agricultural sector is close to my heart. I liked what NFU Mutual represents in the farming community, they’re well respected in the insurance industry, they do a lot of good in the community and the amount of charity work they do is amazing. They have a great claims ethos, looking after members first and then often asking questions later. For instance, offering on-the-day payments in bad weather, then dealing with the policy details later. There’s lots of reasons why NFU Mutual is a great place to work, and once I started talking to them about the opportunity, I got excited. I knew I could make a real difference to the department.

What kind of challenges did you face when you joined?
It was a bit of a whirlwind joining a new organisation and Louie was only six months, so you can imagine! And there was a lot to do. One of the first things that needed my attention was attraction and attrition. People were joining and then being attracted by other opportunities across the business and were moving on a lot quicker than we’d expected. Existing members of our team were also taking external opportunities to try something new. And we weren’t hitting our KPI’s or service levels. As a result, both the overall perception of the department and team morale was suffering.

Of course, resourcing was an issue, as it has been for the whole industry. There were quite a few hurdles to get over, but I love a challenge! I didn’t want something polished, I wanted something we could polish! I was empowered and given the autonomy I needed to make the changes, which has been huge and is very much how NFU Mutual works.

How did you overcome these challenges?
I passionately believe that if you put people and customers first, then the numbers take care of themselves. We had a 12-month mission to create the right culture and the right development, but we didn't have enough of the right people. Essentially, we were never going to get our performance indicators from red to green until we'd done the people bit. So, I spent the first 12 months focused on the people because focusing solely on numbers wouldn’t have delivered the sustainable change we needed in the team.

Recruitment wise, between July ’21 and March ’22 we’ve recruited over 59 new underwriters. And three new team leaders between November and December ’21, which has been huge. Nearly half of our team is new. At times we were losing five or six people a month and now it’s one or two, which is to be expected in a large team.

In terms of targets, we were underperforming across the board, and we needed to get average call handling time down by 2 minutes and increasing calls per hour. But I felt the focus was wrong. I asked the team to data dig for three months to see what good looks like historically and what as a team we’ve been capable of doing. We then relaunched targets for all underwriters in September ’21. Setting different targets for new starters, core underwriters and stretch targets for experienced team members, made them more manageable for each level. Now I've got teams achieving green across the board month on month, who go for dinners to celebrate, as they feel so empowered, which is amazing!

We’ve created a career path, so from day one new starters can see a clear progression route for the next five years and they can see longevity in their role. We want everyone to progress, not just the chosen few. We’re launching the visual for this at the end of the month, but we’ve already taken the actions that make this possible, working with our teams on their Personal Development Plans and creating opportunities for those that want to progress. This has deliberately been done this way around, because when it lands on people’s desks, I want everyone to know this isn’t what we’re planning to do, this is what we’ve done.

What are you most proud of?
I’m so proud of the culture we’ve created here. When you have people like our Head of Customer Service e mailing me after spending the day sitting with our team and saying that she loves the sense of belonging that we’re creating here, it means so much to me. I ran a culture workshop recently in York, as I’m split across two sites, Bristol and York. And people were standing up saying how much it means to them to be a part of my team, it was moving. People who were so disengaged and ready to leave, are now excited about their roles, enjoy coming to work and are planning their futures here. It’s incredible. And people from other departments are expressing interest in joining the team. That was unheard of! I told my team leaders when I joined that we would change the perception of this department and I feel we’ve started to achieve that.

How do you balance work and life?
I’m a good juggler and I enjoy what I’m doing. I love my job and I love being a Mum. I love where I work, the people, the environment and I get such a sense of pride. It doesn’t stop me being tired, but I think when you enjoy what you do, being tired matters less. When Louie wakes up at 2am, I’m bouncing into the room to see him because I’ve missed him! My manager has been supportive, and I always make sure I have a good work life balance. I get to spend a couple of hours in the morning with Louie, and my evenings and weekends are dedicated family time. Work life balance is so important.

What’s next? For your team and NFU Mutual
For the team it’s development, we've just launched an Insurance Underwriting Authority Progression Programme. Previously you would come in and if you showed promise and made the right noises, people would start to work with you to get to the intermediate levels. What we've just launched means that we've taken down those walls and barriers, so now everyone is on that path. But we're supportive of where you are. We want to work with everyone to get them where they want to be - whatever that looks like for you.

NFU Mutual is on a journey and it’s an exciting time to join. It’s a great place to work, the business values, the people, both members and the people that work with us. Everyone is welcome here and that’s something I’m massively passionate about. And everyone is encouraged to progress. Myself included. I’m already developing my successor! There’s so much opportunity here.

Interested in joining Gina and her team? Take a look at our current opportunities