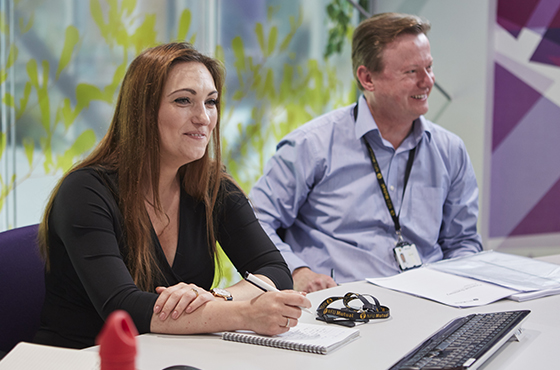 When you talk to the people in our Pricing teams about what it’s like to work here, the theme that comes up time and again is NFU Mutual’s focus on people. Whether it’s customers or employees, there’s a sense that the business genuinely cares about people and goes out of its way to help improve lives. This is particularly true for Pricing, as their work has a direct impact on the costs our customers pay. So, we asked some of the people in our Pricing team to sum up what this focus on people means to them.

Being a Mutual
Talking to the Pricing teams, one of the first points they mention is the company’s mutuality. As Jess, a Lead Analyst explains: “We're only effectively aiming to make 2% profit and anything above and beyond that is ultimately given back to the customers, because they are the shareholders.” For her, this means that she feels more comfortable with her role than she might be at another organisation.

Katy, one of our Pricing Delivery Managers agrees with this view. She believes it’s all about fairness and providing a good service to customers. “I think everyone should be treated equally,” she says. “What I like about working at NFU Mutual is that we’re not just here to exploit customers and make as much money from them as possible. It’s about being honest – not having small print that says we won't pay your claim because you've said X instead of Y.”

This obviously affects the way that people work in the Pricing teams. Another of our Pricing Delivery Managers, Alvyda says that mutuality puts a different spin on everything. She used to work at a company with shareholders, and says “even though there was a banner saying ‘customers at the core’ the emphasis was very much focused on profit.” She’s been working in the NFU Mutual Pricing team for four years now and sees a very different emphasis here: “The customers’ interests are our top priority, so you’re always thinking how your work affects your top or bottom line.”

Great flexibility and work-life balance
The emphasis on people’s needs extends beyond looking after customers at NFU Mutual. One of the main benefits for members of the Pricing team we spoke to is the flexibility. Alvyda says she feels like her life matters to the business and describes it as an “empathetic” environment. “There’s a broader realisation that you have a life outside of work and sometimes that can take a priority,” she says.

Alex, a Data Consultant, agrees: “They're very flexible if you have a family or want to start a family,” he says, adding that this means people often have the option to change their hours or the number of days a week they work. In fact, he says, “it feels like it's encouraged. If that's what you want to do with your life, they will happily support you.”

Pricing Development Consultant, Dan, is keen to point out that you’re still expected to deliver. But, he adds: “there's also an expectation for you to maintain your work-life balance. And they're very, very good around that.” He says this was demonstrated when the UK went into lockdown in March 2020. Before this, NFU Mutual was predominantly an office-based company, but within around three weeks, almost all the 4,000 or so employees had moved to working remotely. Dave, a Pricing Development Consultant agrees. “During the pandemic, I think NFU Mutual was one of the first companies to tell all of their staff that they'd pay 100% of their salaries, regardless of whether they could work or not.”

A great place to work
When they’re discussing what makes NFU Mutual such a great place to work most of the Pricing team mention the people. But there’s also a strong association with the company culture and the sense that the business is really looking after them.

For Katy, Pricing Delivery Manager, a lot of this comes down to the working environment in Stratford-upon Avon. "The location is outside the town centre and relatively in the countryside and there's a nice big field at the back," she points out. "And there are sports activities you can get involved in, as well as other social activities.

But, more than their surroundings, people talk about the overall work atmosphere. Jamie, a Graduate Trainee in the Commercial Pricing Team summed it up: “The ethos and culture were really important for me when I was looking for a job. And in the Pricing team, I know that I work with people who care about me and I work on projects that I care about, for customers I care about too.”