Embracing the opportunities of hybrid working 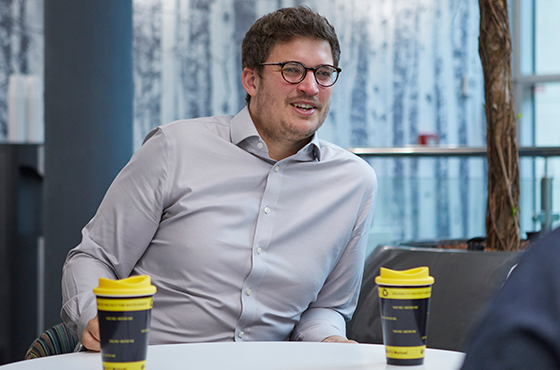 At NFU Mutual’s Guidewire Centre of Excellence (GCoE), we’re developing and implementing a huge number of transformational projects. The GCoE supports large-scale, long-term programmes of work that involves extensive coding, business analysis and testing, as well as agile working. Working with overseas partners in different time zones, along with the challenges of working through lockdowns, means the Guidewire teams adapted quickly to hybrid and home working. We talked to some of the team about how this works.

For Gareth Brown, NFU Mutual’s IT Lead for the GCoE, hybrid working wasn’t anything new for a lot of the Guidewire teams. “On the larger scale projects, many of our partners are offshore, so those teams are used to working on video calls and with people in different time zones,” he explains. “But we’re still on a voyage of discovery when it comes to the optimum model for home working. We see it as an opportunity – in the past, we only recruited people who could commute to our offices, but now we see the opportunity to recruit from anywhere, because we’ve seen how it can work.”

80/20 working and how it works for the team
One of the initiatives that NFU Mutual have introduced is the idea of spending at least 20% of your time – one day a week – in the office. Gareth Brown says this is because the business still sees the benefits of working face-to-face, but whenever possible, they want to try and deliver what’s best for each person. “We allow the individual teams to work out the rhythm of when they want to work in the office and decide it among themselves. We’re embracing the opportunities, rather than seeing it as a constraint.”

This is backed up by Becky Muir, who manages two Guidewire teams – BillingCenter and ClaimCenter. Each team is approaching 80/20 working in different ways, as she explains: “The BillingCenter team have been incredibly busy and have a lot of early calls with offshore teams, so we haven’t been asking them to come in,” she says. “Although I think when everything quietens down, we’ll probably say come in if you want to, or we’ll organise something like a talk that will get everyone in at the same time.”

For the ClaimCenter team, the approach has been different: “They’ve been coming into the office all together every Thursday,” she says. “For me, it’s about facilitating ways for people to get together in a way that makes them feel they’re at their most productive.”

Making it work for you
Becky Muir points out that everyone has a different view on hybrid working: “We have some people who thrive in the office atmosphere and can’t wait to get back and there are others who still prefer the benefits of working from home,” she says. And this is reflected in how different people have approached it.

Laura Jordan joined the Guidewire team in mid 2020, so she’s been working flexibly since she started. “I think the business have been really receptive to it, accepting that some people prefer working from home and get a lot more done. And others would rather go in and have that social element,” she says. “For me, half of my team are based in India anyway, so we’re always going to have some element of hybrid working, because our developers and testers are all offshore.”

For Naomi Clayson, a Senior IT Workstream Lead in the Guidewire team, NFU Mutual have been “really accommodating, supportive and flexible” about 80/20 working. “It all depends on your own individual circumstances and how it works for you,” she says. “I think they’ve been brilliant at getting the flexibility right. It really works in terms of work/life balance.”

Dan Tew, a senior developer, agrees. “It’s nice to get into the office and meet people face-to-face,” he says. “My team has one day of the week when we all go into the office – it’s up to you if you go in, but that’s our team day when we do anything you can’t do on Teams. But this is all flexible, depending on what you want to do as a team.”

Support for working from home
Tracey Westbury, a Guidewire tester, says that the company gave her 100% support to work from home. But she also says that the support from her team was really helpful. “As a team, we’ve worked together for quite a long time, so we have good working relationships. And we gave the new people who joined us during lockdown all the support they needed, helping them to settle in and keeping up contact with them.” So, when she first met them in person, she says it felt like she already knew them.

Durga Balagee, who joined the team in 2021, was also impressed with the support NFU Mutual gave her to work from home. “Even before my start date, they sent me all the essential equipment I’d need, such as a laptop. That was really good,” she says.

Tracey Westbury agrees. “The business gives you all the equipment you need. I’ve worked for quite a few companies in the past and NFU Mutual is one of the best, both from a work and a personal perspective.”