Three reasons why NFU Mutual is the company for me 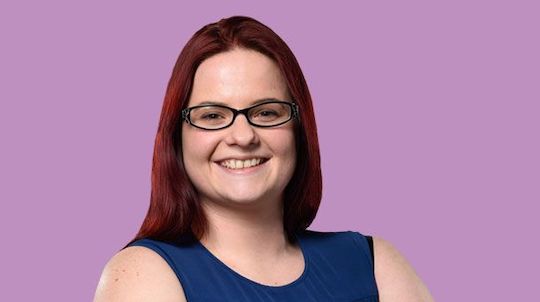 Meet Harriet, one of our new Commercial Claims Handlers. Originally joining us on a temporary basis four months ago, we decided to find out what inspired Harriet to stay permanently with NFU Mutual.

Working for NFU Mutual is better than any other job

I've spent the last few years in quite independent, self-employed positions. I couldn't have been much further from insurance, and I'll be honest, I hated office jobs. My experience had been a world of being bossed around with no thanks whatsoever.

So I was apprehensive when I first joined NFU Mutual. But I was pleasantly surprised because it was clear from the start that there are opportunities here. There's a career ladder for everyone, and they don't want you to feel stuck in the same role. It was an easy decision to join NFU Mutual permanently. I've adapted well, and it's really surprised me how much I enjoy the job – yes, I actually look forward to going to work now.

You are genuinely valued by NFU Mutual

NFU Mutual really shows their appreciation for you. I was impressed during the interview, because they outshone other companies with their professional approach. Though I couldn't talk about any directly relevant experiences, they listened and valued the experiences that I did have. They saw my potential when others didn't.

And that appreciation continued once I started. They look out for our welfare which I didn't necessarily expect. But they show it with smaller gestures too. For instance, I worked overtime following the floods in Carlisle. I didn't feel I was going above and beyond what I should, but NFU Mutual acknowledged the effort with a lovely bottle of champagne. It was such a nice touch on their part, and reinforced why I really like working here.

No-one will hold you back from developing here

I was a little worried that my lack of insurance experience would be a disadvantage, but I've been really well supported and I can see my progress. They're more than happy to adapt the learning to suit your needs, too. I have a great team of people who are like encyclopaedias of insurance, and they all help me out. My managers check in with me, the whole team is approachable, and I'm given the time to properly learn everything I need to know.

I've already had the chance to discuss where my future can go with my Team Leader. I'm interested in taking on people or project management, and I'll start professional qualifications too. You've just got to do your part and work hard. It all takes time, but if you want to achieve something then NFU Mutual will make it happen.