Pricing. Work that has a real impact 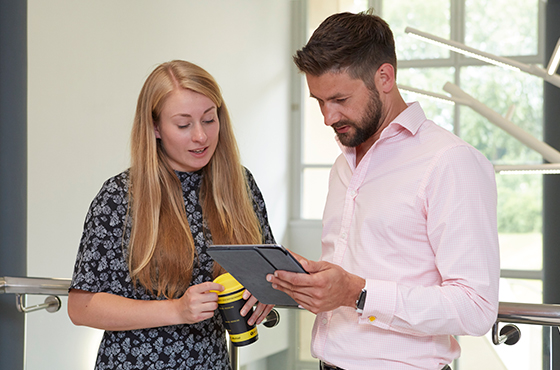 17 May, 2021 See all Pricing jobs See all Stratford-upon-Avon jobs

When you talk to the Pricing team at NFU Mutual, you get a real sense of the importance they put on their work. The projects they work on not only have an impact on the whole of the company’s business, but as a mutual organisation, their decisions affect customers’ lives every day. We spoke to some of the people who work in the Pricing teams about what that means to them.

Important work
The fact that NFU Mutual’s customers are ultimately the shareholders makes a big difference for a lot of the people who work in the Pricing team. Alex is a Data Consultant in the Pricing team and he’s aware of the wider importance of his work every day. “You’re going to affect customers’ lives and how our Agent across the NFU Mutual Agency Network deal with customers, as well as affecting the rest of Pricing,” he says. For him, this makes it an exciting place to work, because he has the potential to change people’s lives. “If you can innovate something, it's going to have a massive impact on not only your department, but also on the price that the customer is going to ultimately get at the end.”

Jamie, a Graduate Trainee in the Commercial Pricing team, sees it in very personal terms. “I deal with tractors and farmers,” she says. “So all the pricing decisions I make will, at the end of the day, have a knock-on effect on a farmer somewhere across the UK.” Alvyda, a Pricing Delivery Manager, agrees. “I know that my job will leave a mark,” she says. “I might develop things in one way or another way, but I know this will be used in the future, rather than being put on a shelf.”

Dave, a Pricing Development Consultant sees the importance of pricing to the overall NFU Mutual business, too. Particularly with the recent announcement on pricing for new and existing customers. He says this will give Pricing an even bigger role in the business: "It's going to be such a fundamental shift in the whole industry in this country. As a mutual, we've got a real head start on our competitors because we already look at how we can be fair to our customers. I think there might be more of that on the horizon, but because of the way we approach pricing, I like to think we'll be pretty well-placed to cover them."

Variety of work
For Risk Pricing Manager Kirsten, the ability to affect people’s lives makes working in pricing at NFU Mutual more varied than working in other companies. “I get involved in different types of work and that's what really interests me,” she says. “When you look at other insurers, even if they sell a diverse range of products, their teams are very focused on one or two of them, whereas we literally get involved in everything.”

Dan is a Pricing Development Consultant and he agrees with Kirsten. “I’m part of a project that's going to change NFU Mutual’s approach to pricing going forward,” he says. “We’re creating a more digitally friendly pricing structure to give the business a foundation for things going forward. So, this is a company that's been around for a very long time and now I get to have a say in what it's going to be doing in the future. That's exciting.”

This variety and the ability to influence different projects and shape the future of pricing at NFU Mutual is something that Alvyda feels very strongly about. “I want to learn things and I want to experience things that I haven't experienced before,” she points out. “So the variety that my role brings means I grow.”

Kirsten agrees that the variety of work she enjoys means there are far more opportunities to shape pricing in the future. “We've not figured all of it out yet,” she says. “So it's not like everything's a done deal and you're coming into a well-oiled machine. You've got a lot of options, so you've got that opportunity to make your mark.”

Find out more
Learn more about how you can have an impact in Pricing at NFU Mutual.

17 May, 2021 See all Pricing jobs See all Stratford-upon-Avon jobs